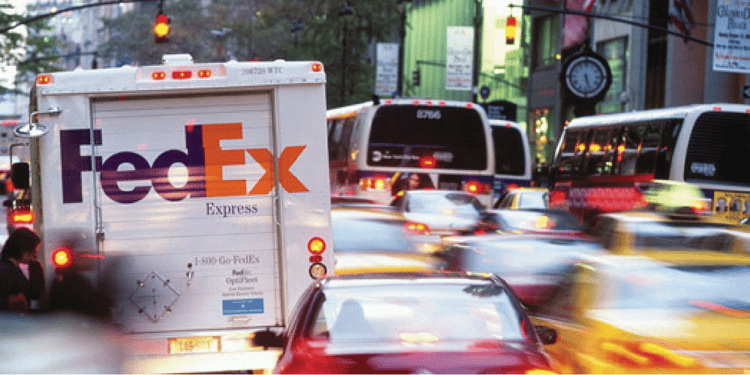 Were you aware that it’s possible to contribute to a traffic jam just by shopping online? It sounds far-fetched, but it’s much more likely than you think.

With the growing popularity of online shopping comes the reality that every package that’s ordered becomes a package that needs to be delivered, which means that a delivery truck will be out on the road… contributing to traffic congestion.

Last year, the United States Post Office delivered 5.1 billion packages nationwide. This number, up from 3.1 billion in 2010, seems to be in line with the growth of online purchases.

With e-commerce growing year over year, and the shipping industry increasing their fleets to keep up with demand, a toll gets taken on the roadways. Traffic from trucks currently account for $28 billion — 17 percent — of U.S. congestion costs, in wasted hours and gas.

Urban centers — because of their population, narrower roads, and limited parking — are forced to shoulder the burden of greater congestion on city streets due to increased shipping demands. According to the Center of Excellence for Sustainable Urban Freight Systems, every 25 people produce one delivery originating from an e-commerce business. For urban areas with large populations, you can see how this would become a problem. With so many consumers generating such a high volume of package deliveries, the strain put on a city’s infrastructure can become quite taxing.

Additionally, with the proliferation of urban sprawl into more rural areas, the congestion issues that package delivery causes in cities will only cast a wider net.

To combat this growing problem, some cities are taking drastic measures. In London, for example, a plan was outlined to ban private deliveries to an individual’s place of business. This came about after discovering delivery vans accounted for a fifth of the city center’s traffic. Aside from traffic jams, officials were also concerned with the emissions pollution that results from so much congestion.

Besides restricting delivery trucks into a city, there must be other ways to solve this issue. One such solution is managed customer pick-up centers.

These centers can have a multitude of benefits. By utilizing space in strategically placed urban centers, they can help to mitigate traffic, as they eliminate the need for delivery services. Also, many of these stores can be easily accessed by active forms of transportation, thus eliminating even more cars on the road.

Additionally, managed pick-up centers allow customers to utilize the “click-and-collect” shopping method, in which shoppers make their purchases online and pick them up in store. By doing this, customers can save money on shipping and, oftentimes, retrieve the item the same day as their purchase.

There are many more reasons why managed customer pick-up centers can be a benefit to the consumer and a city, from offering a secure location for pick-ups, which can cut down on crime in certain locations, to offering customers the multi-touchpoint based shopping experience that many now want from their e-retailers. But, it’s important to remember that by utilizing these centers instead of delivery services, customers can help reduce traffic congestion and therefore reduce emissions, and, according to one study, maybe even increase their happiness in the process.